Four years before I was born I saw you;
you were recalling something about a broken leg.
We were at a zoo. I saw us a on T.V. screen,
running through a stone maze,
me behind you and you waving your arms, both
of us in a hurry, saying something silly, though the truth
is we were afraid the lions would get us. A strange zoo
with the dens of giant cats perched above the embankment
of stone walls, no barrier to keep them away, at their prey
they hurtled down the rock hill and crag.

And then I was lying next to you,
my arm around you like we used to sleep
half kissing, half biting your smiling cheek,
your grin pinching the flesh of your eye
between the brow. And it was 1979,
four years before I was born and then it was
2001 and I had only just met you,
and terrified, I failed to defend
you when mugged on the streets.
Shattered black space, and a fizzle of stars,
I don’t remember the pain my broken nose
brought, I didn’t know the blood was gushing,
but a mad eye on the punk, clenched teeth at the thug,
serpent skin fleshed in crackling feigned anger.
I missed his fist as it went for your face,
cracked your teeth, crooked your jaw.

Now it’s 2010 and my arm is wrapped around air
as morning stirs awake. No blanket, no pillow, just your ghost
solid in my mind and I embrace, warm and close, present
like a fact of history, laying like lovers discovered in each other’s
arms. A warm memory resonant, a sunbeam curtailed
and furloughed like a warm spoon against my body,
fetal hearth, emanating like a bed of coals shimmers
with glistening embers dancing in the haze. My
heart sinks into the magma, burns magenta
to neon carnation, electrifies plasma,
swells light, muffles blood hues to open eyes
and lulls them to sleep, lulls in the comfort
of dismemberment, in gradual change,
in separation anxiety  that brings me back.
1979 was the last time I saw you.
We were young then, as we are now,
trying to finish what we’d begun,
but everything’s fucked up
this time around.

“Why 1979?” is a poem written by Michael Aaron Casares. All rights reserved. 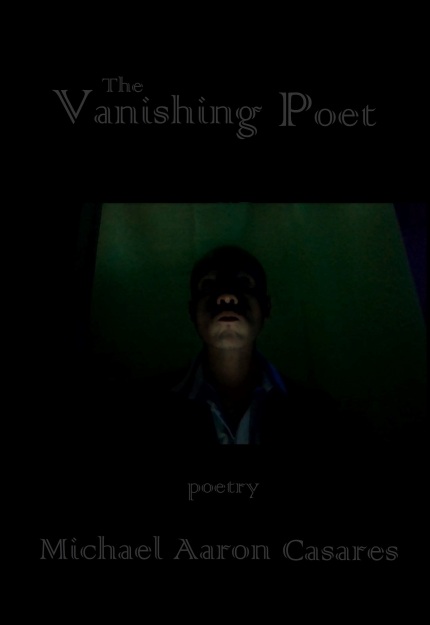 The Vanishing Poet a new collection of poetry by Michael Aaron Casares.